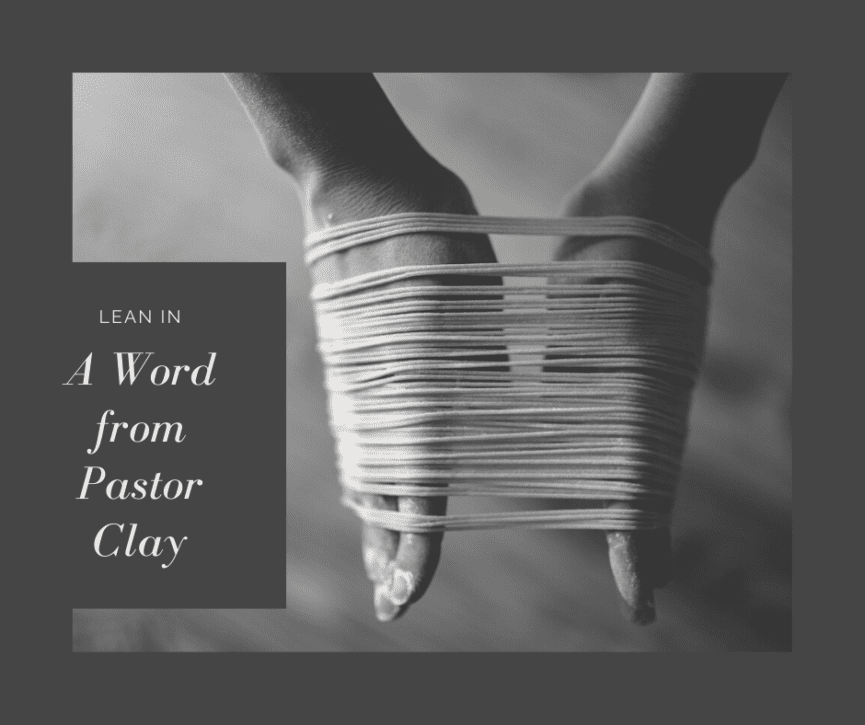 I was speechless after watching the 10-minute video of George Floyd’s murder and I’m speechless after watching the protests that turned violent in the aftermath. Both are so far from the image of the world God has for us. When conversations don’t happen with non-violent protests, we see the conversation forced to the table with violence. But let us not take the conversation about racism off the table even if we’d prefer it was put there in a different manner.

Over the past several years, I was part of a mixed-race group that met about every six weeks to discuss race. We had an open dialogue about issues in our community and in our world. Through these conversations, I learned how often people of color feel targeted for one reason or another far more often than I have ever felt targeted as a white man. I’ve never been followed by the security guards in the store or pulled over when driving or walking through certain neighborhoods. People in our conversation group had that happen to them many times. In Flower Mound, one person’s son was called the “N” word as he was in a person’s house fixing his cable service. One person was handcuffed for 30 minutes in front of his house in another local city as he was moving out of it. The police officer thought he was stealing from the house. It took a neighbor explaining to the officer that this was the man’s home for him to be unhandcuffed. The police officer then said, “How do people like you afford houses like this?” Another man shared how his childhood house was burned to the ground the day his family closed on it because it was in a white neighborhood. This man has served in the military his whole career. His patriotism and belief in this country was inspiring to me. My time in this group was filled with conversations that opened my eyes to the harsh reality many black Americans face and how they somehow persevere in the midst of it.

I believe that the church, empowered by the Holy Spirit, can and should be the greatest force for good in this world. In Philippians 2, the Apostle Paul urges the church to be unified, be humble, and to have the same mind that was in Christ. Paul urges the people of God to not look out to their own interests, but to the interests of others.

A rubber band can withstand a certain amount of tension as two sides are pulled apart, but eventually, it breaks. The only way to keep it from snapping is to bring the sides together. We’re seeing a lot of snapping right now, but perhaps we can lean into the cries of the black community during this time. Instead of pulling away because of fear, uncertainty, or disagreements about the protests, let’s lean in to discover the heart of the matter.

When we lean in, we reduce the tension, seeking unity instead: unity in the belief and understanding that all people are created in the image of God and need to be treated as such. What we’ve been reminded of recently is that people of color are often not treated the same way white Americans are treated. I use the term “reminded” with hesitation. People of color live with this knowledge day in and day out. They don’t need reminding. I need to acknowledge that through the current events, the white community has been reminded of the racial injustice that exists every day in our country.

Let’s follow Paul’s encouragement from Philippians 2:4. He says, “Let each of you look not to your own interests, but to the interests of others.” For those of us who are white, let’s use this time to look to the interests of our brothers and sisters with different skin colors. We can’t let politics divide us. Let’s be unified and work toward a solution together. We are the church and we are empowered by the Holy Spirit. God can and will heal. We have lots of work to do.

This week, I invite you to join us for a special Sunday worship service where we will look to God for guidance at this time. We will spend time lamenting and grieving, spend time singing to our Creator, and spend time discerning what steps we might take together.

Throughout the coming weeks, we will be creating space for vital conversations and for learning. We’ll be sharing these opportunities and resources over the coming weeks. We invite you to prayerfully consider how you will humbly take steps with God, with our church, and with our community as we seek peace, healing, and justice for the black community and for our world.